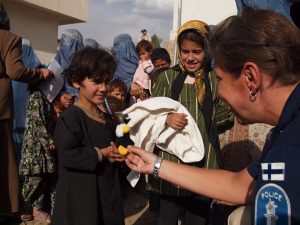 The Road to 40% : Recruiting Women in Finnish Civilian Crisis Management

CMC Finland Working Paper The Road to 40% : Recruiting Women in Finnish Civilian Crisis Management resumes the series that was last added to in 2015. The purpose of the series is to produce analytical yet pragmatic information on the topical issues of crisis management and peace operations. This paper in particular focuses on the 20th anniversary of the UNSCR’s 1325, presenting unique insight in to how the participation of women in civilian crisis management has developed in Finland.

Between 2007 and 2015, CMC Finland published eleven papers under the series title above. The majority of the papers were written in the early stages of the CMC’s existence with five being published in the first two years alone. This was, at least partly, because the series was funded by the EU’s regional funding instrument, and when the funding was no more, the same went for the publications.

The previous Working Papers of the series included seminar reports, project reports, research papers and commentaries from professionals working in the fields of peace building, crisis management and civil protection. The issues that were topical then, remain the same topical issues today, for example vol. 2/2007 discussed crisis and the environment – edited by the current Director Kirsi Henriksson.

Why and for whom?

The restarted series will include thematic and topical papers, following an academic format but with a more relaxed approach. We hope this new style will make them easier to read and more useful for professionals working in civilian crisis management fields, whether they are seconded experts, national decision makers or the general public. Crises and conflicts are ever more complex and the need for research-based knowledge in supporting decision makers is clear. The upcoming volumes will discuss, for example, the conceptual ambiguities of crisis management and the interaction between different people from different backgrounds in the context of civilian crisis management.

Can I take part?

The volumes are predominantly produced by current and former CMC employees but we are also inviting others working with these themes, including our own experts, to contact us if they wish to contribute.