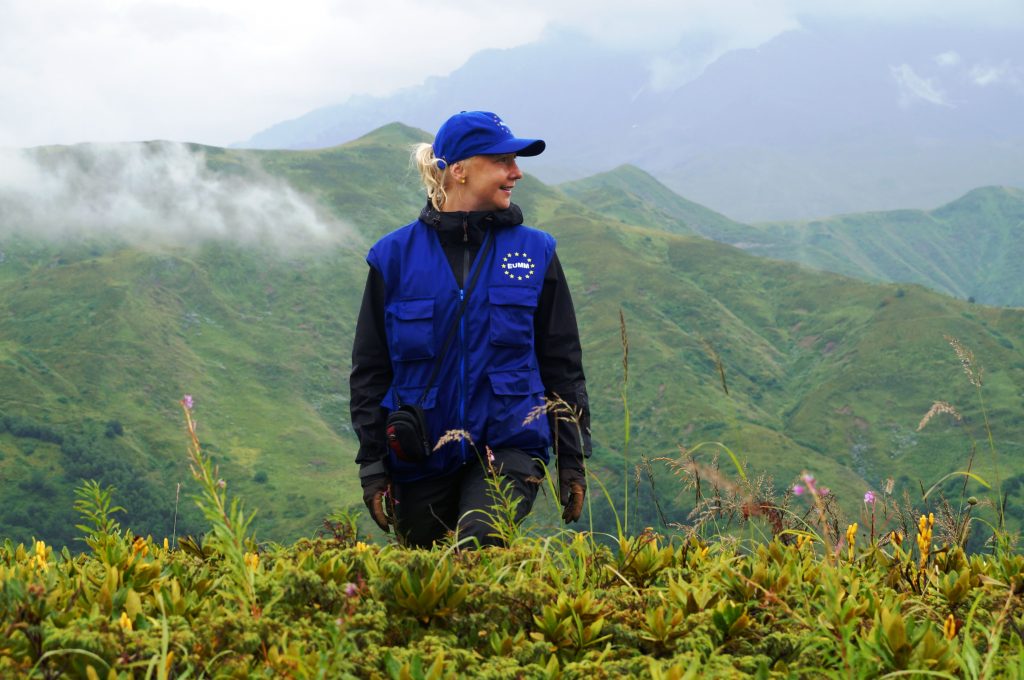 One of the main achievements of Finland in its participation to civilian crisis management is not only that 40% of our seconded experts are women but also that we have had women in management positions. Ms. Mia Rahunen tells about her experiences with the EU Monitoring Mission in Georgia and her career progress from monitor to Deputy Head of field office:

“I joined the EU monitoring mission in Georgia in June 2014. I wanted to have a hands-on job after several years as a sustainability adviser for Nordic governmental cooperation. It was my first civilian crisis operation and the contrast between Copenhagen and Zugdidi in the western Georgia was remarkable – but I loved it from the very first day!

As a monitor I got the practical job I had wished for: patrolling along the administrative boundary line with the breakaway region Abkhazia, driving in difficult off-road conditions, talking with local people, getting to know all the bushes and hills, measuring fences and observing security actors.

After a couple of months I started to lead the team, a year later I changed to the operations office and the final year of my assignment I worked as the Deputy Head of the field office with the staff of nearly 70 persons. I still strived to go on a patrol every week, but my main work was now done in the office. Hiking boots had to occasionally be changed to a suit, when I participated in the international UN-led meetings in Abkhazia.

My tour of duty in Georgia ended five months ago. When I look back on those three plus years now, I am definitely thankful for the opportunity, which opened up a whole new work field for me. Hopefully crisis management and conflict prevention will be part of my work in the future too. I also gained valuable leadership experience. Combination of different professional backgrounds and cultures is mostly rewarding, but sometimes also difficult: there are many diverse and sometimes even contradicting expectations on how you are supposed to do your work.

When a woman rises in a hierarchy in a male-dominated work place, you often hear comments on her being chosen only because she is a woman. I heard those comments too, but I refuse to believe that I would have got my positions only because of my gender. I do believe that being a motivated, determined and hard-working professional had more to do with it.

However, what comes to monitoring activities, sometimes monitor’s sex does make a difference. In order to gather comprehensive information it is crucial to have diverse patrolling teams, so that both female and male interlocutors can be equally reached. During my time approximately 25% of the international staff in our field office were women. It is not enough, but it was not easy to increase the amount of female monitors either: as a member of recruitment panels I saw how male-dominated candidate lists many member states sent to the mission.

We all need a gentle push every now and then to perform to our full potential. Without the encouragement from my colleagues I would probably have stayed as a monitor and never applied for other positions. But luckily I did! Civilian missions offer good career development opportunities not only for military or police officers but for other professional groups too.”